The Coastal Wilds of Tasmania cruise explores Australia’s island state poised at the edge of the world where the Southern, Indian and Pacific Oceans collide. Tasmania’s pristine World Heritage wilderness and national parks teem with native wildlife, where rugged mountain ranges meet the sea with soaring coastal cliffs and crescent-shaped beaches carved by the elements. Amidst this pristine, natural backdrop, Tasmania’s intriguing colonial history is underpinned by a compelling convict heritage and historic sites. Follow in the pioneering footsteps of intrepid colonial explorers to far-flung reaches of the island where tales of maritime adventures abound, preserved streetscapes are virtual living museums and world-class artists find inspiration at every turn.

Cruise to the edge of the world on a Tasmanian expedition cruise that teams wombats with wine, beaches with brie and convict ruins with craft beer in a palate-pleasing adventure cruise into Tasmania’s wild heart. 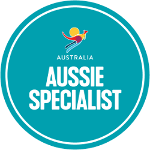 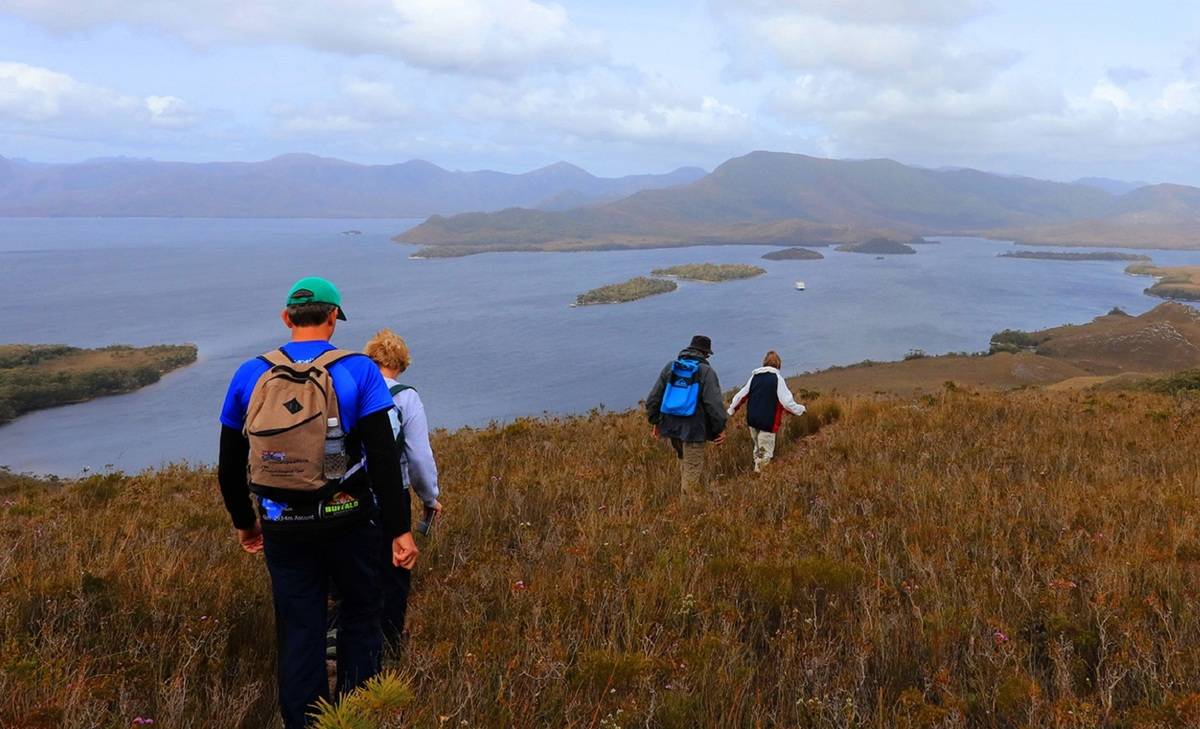 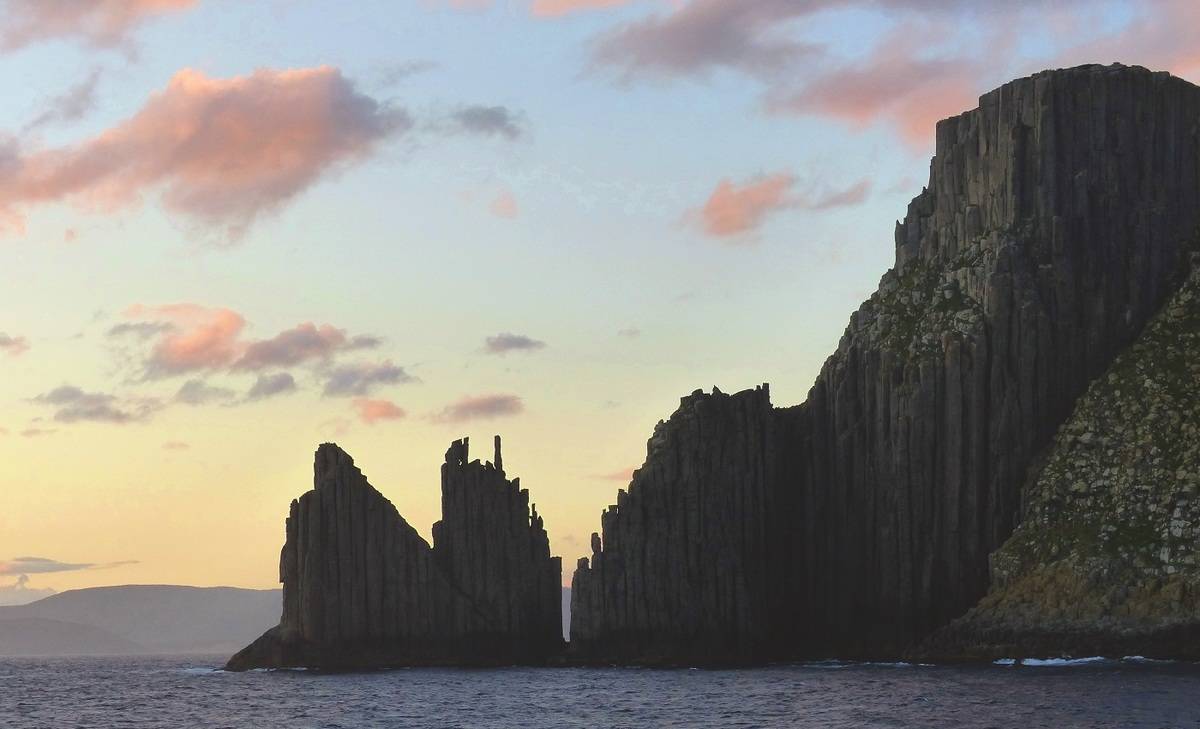 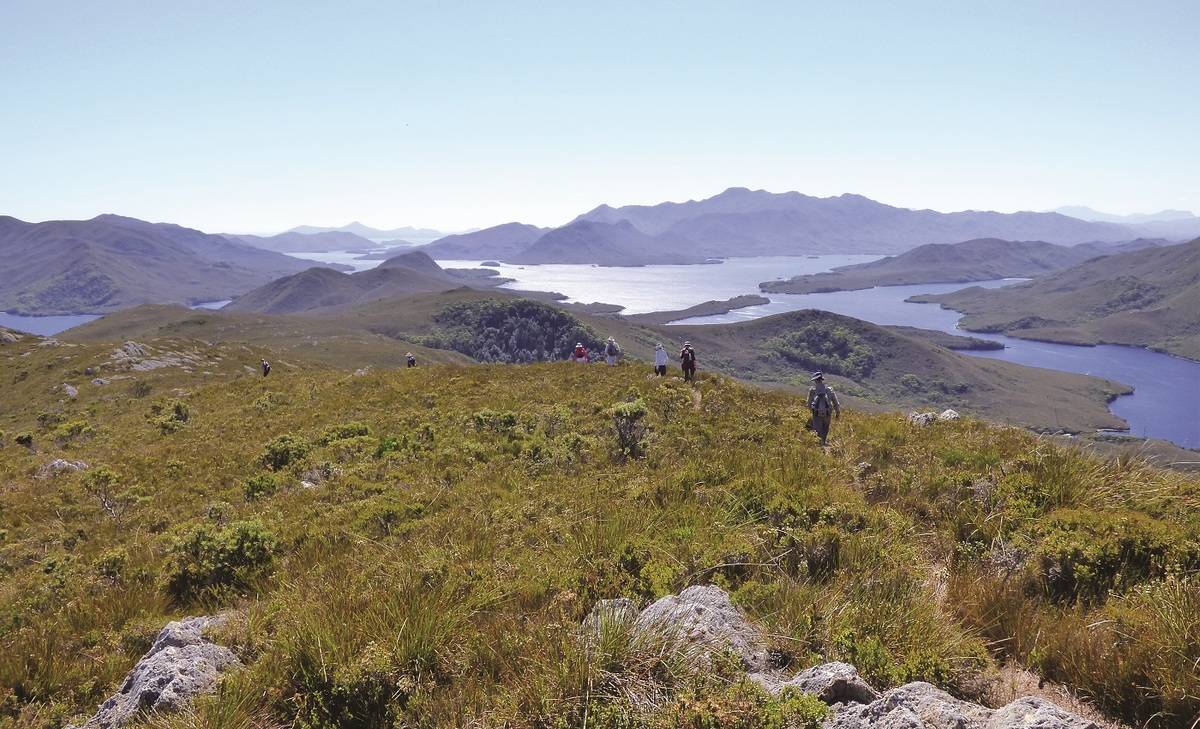 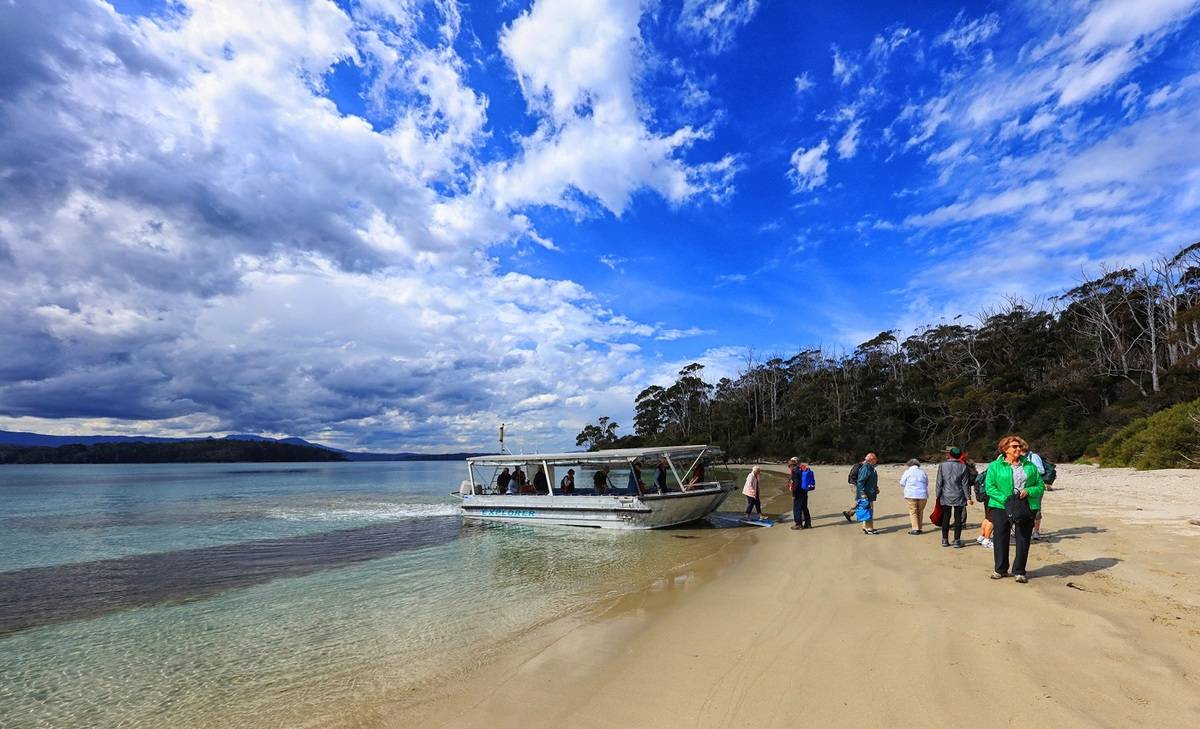 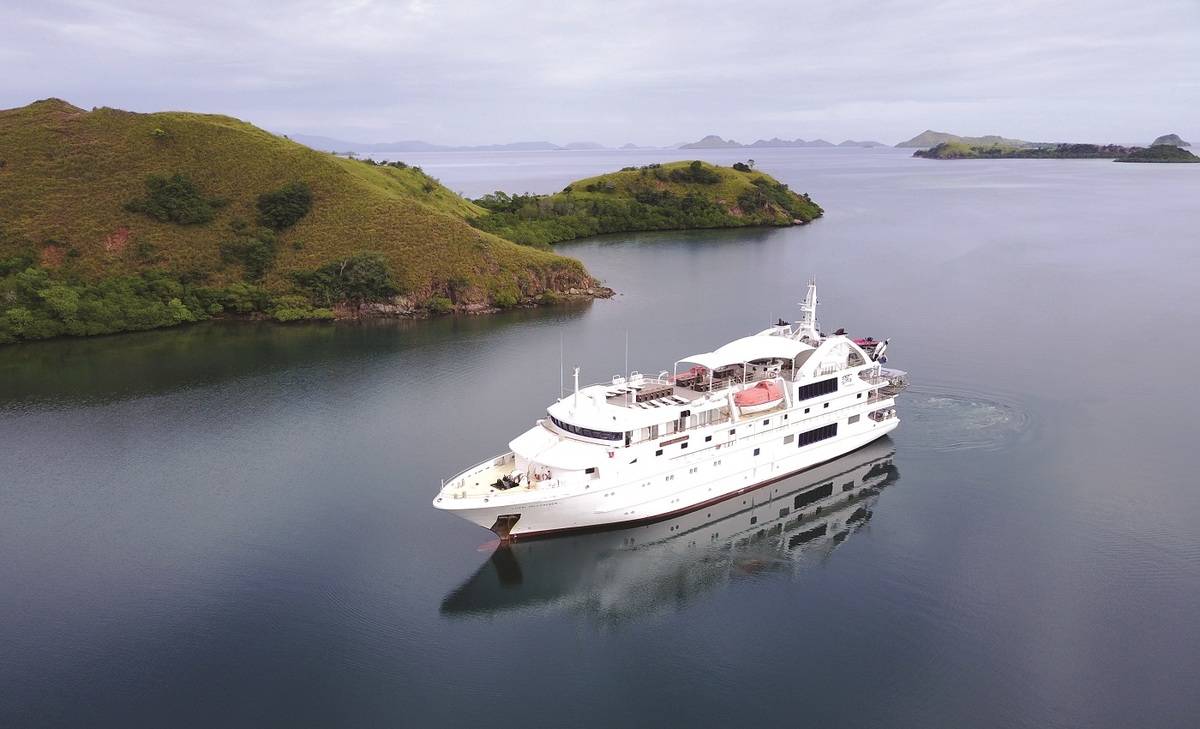 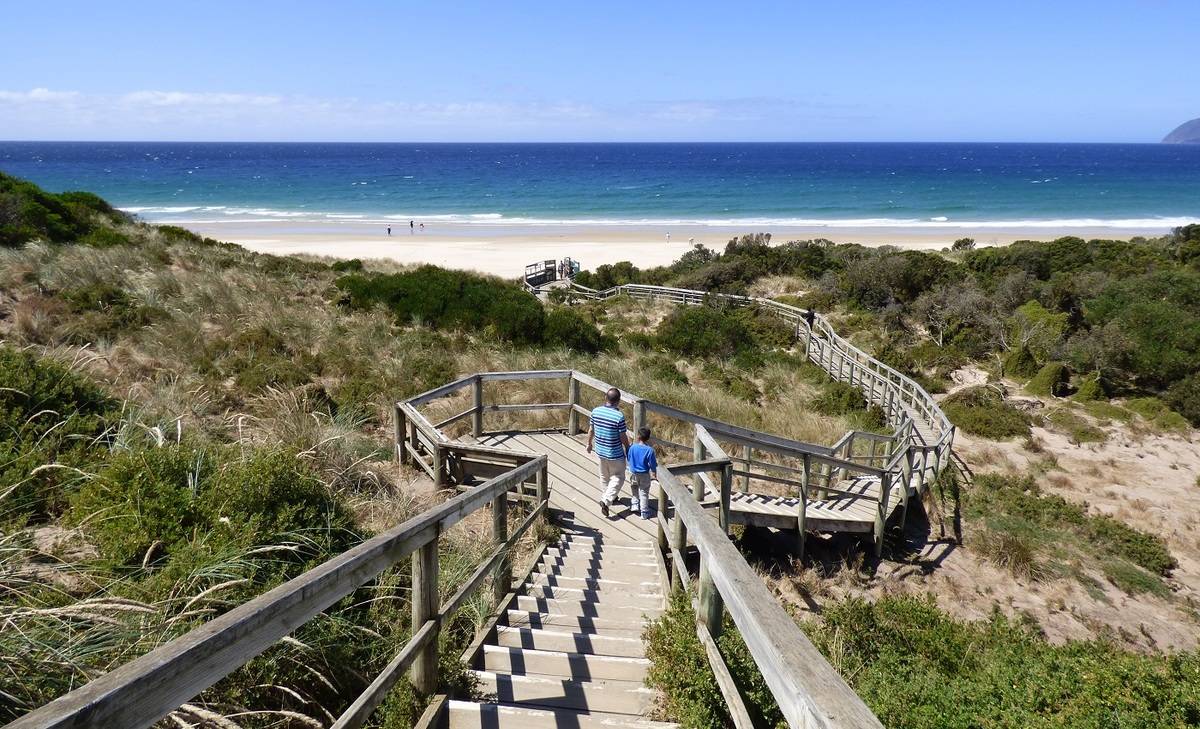 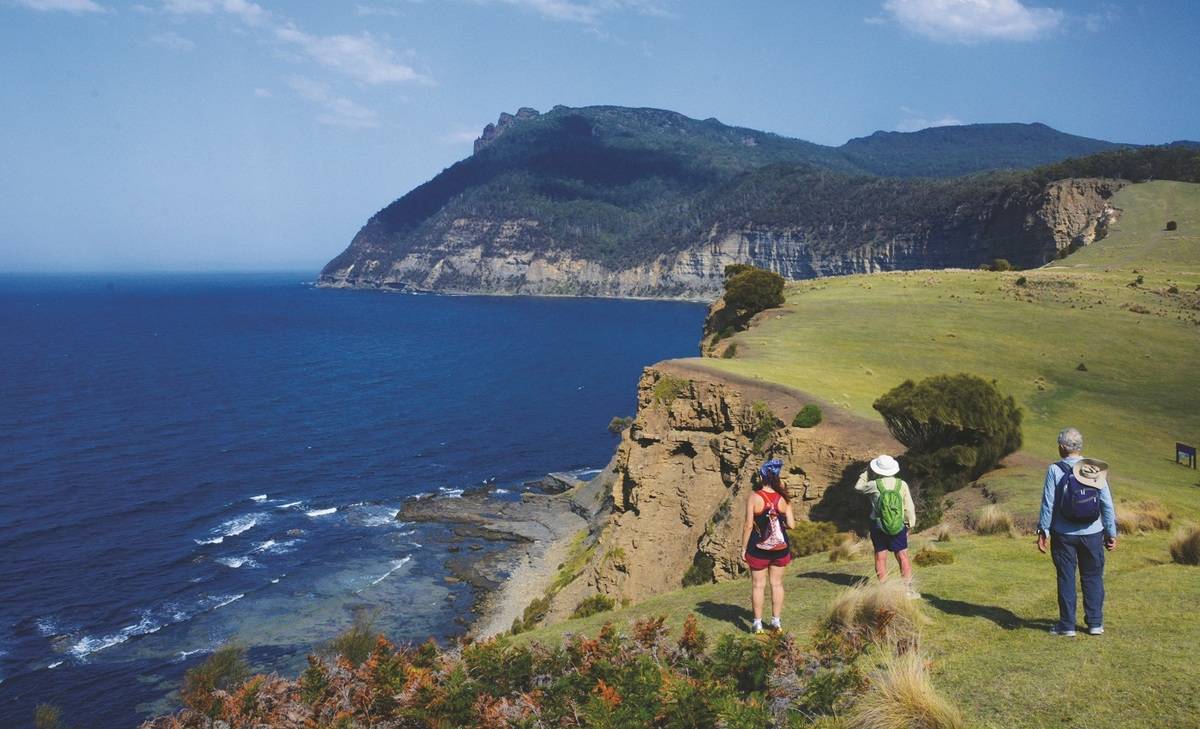 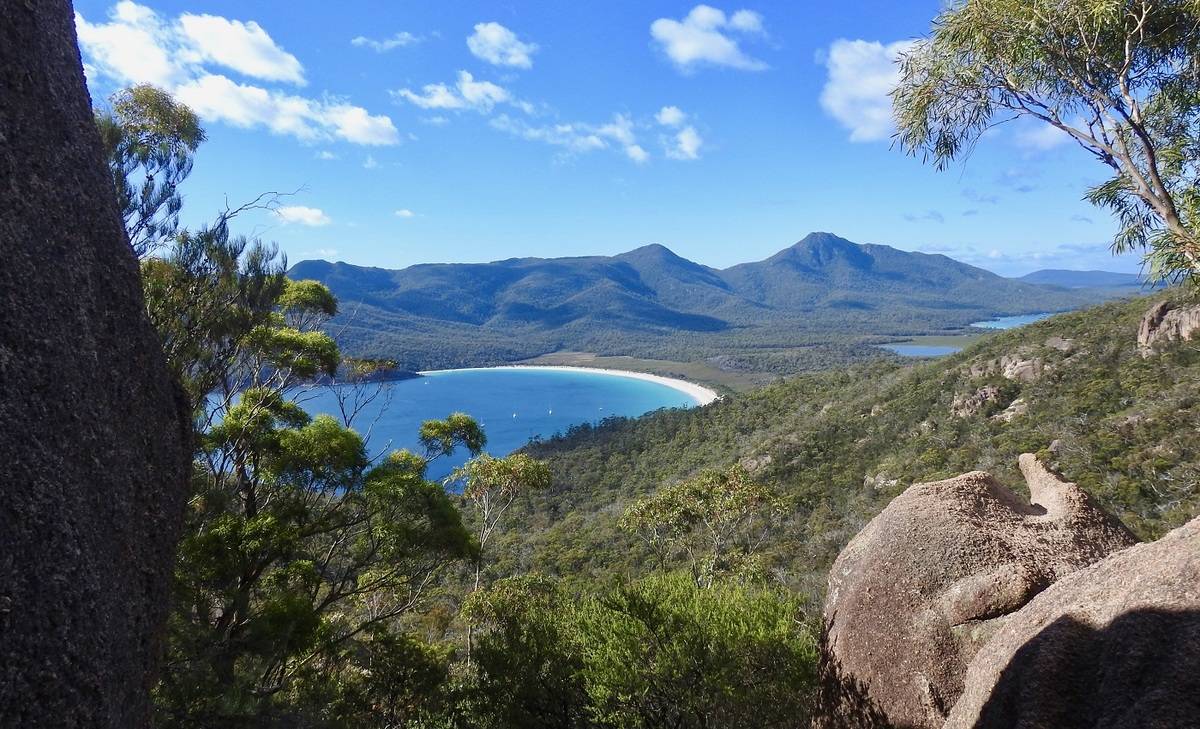 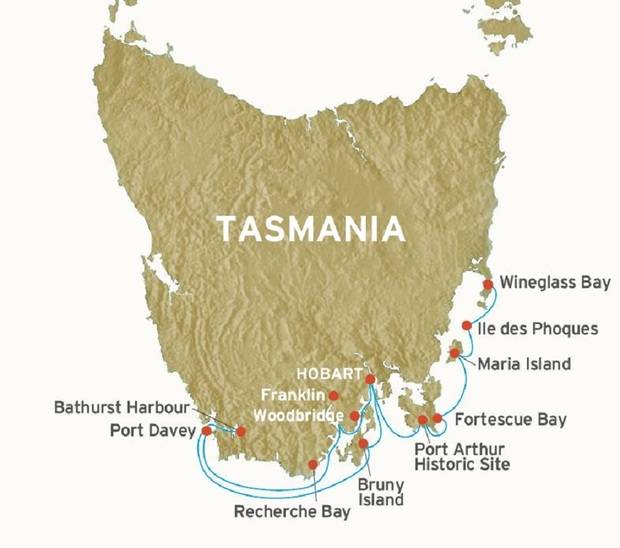 Board your small ship at Hobart’s Princes Wharf at 4:00pm where there is time to settle into your cabin before our 5:00pm departure. Take the time to become acquainted with all the facilities onboard before meeting your fellow travellers, the Captain and crew for the Captain’s Welcome Drinks.

The Captain and Expedition Team will make daily itinerary decisions to maximise the guest experience and take advantage of opportunities opened up by weather. There will be a daily briefing onboard to advise guests on the upcoming day’s activities. The expedition will visit Port Davey and Bathurst Harbour conditions permitting. We always aim to visit these beautiful destinations, but if we are not able to enter, an alternative destination more appropriate to the weather conditions will be chosen by the Captain. Note the summer temperature can still be very cool especially with the wind chill so warm layered clothing is essential.

Expedition highlights may include:

PORT DAVEY & BATHURST HARBOUR
Here on the edge of the world in southwest Tasmania, the landscape is about as wild as it gets. This region has no road access, surrounded by raw, craggy-peaked mountains and drowned river valleys, where tannin-rich freshwater sits atop saltwater, tinting the ocean the colour of tea. Spend two whole days (weather permitting) enjoying the rare
opportunity to hike, kayak and take in the pristine natural environment of Port Davey, part of the Tasmanian Wilderness World Heritage Area. Explore the nooks and crannies of Bathurst Harbour and learn about intrepid explorers and Indigenous Australians who once walked this land. Enjoy the unforgettable experience of kayaking in Bramble Cove, hiking the button-grass hills, and looking for the rare Orange-bellied parrot at Melaleuca.

BRUNY ISLAND & ADVENTURE BAY
At Adventure Bay on the east coast of Bruny Island, hike along the dramatic coastal cliffs of Fluted Cape and spot the endemic Bennett’s Wallaby. Cruising the base of the near-vertical dolerite cliffs in Xplorer, take a closer look at Penguin Island, which is connected to Fluted Cape at low tide. Learn about how southern right whales were almost hunted to extinction and Adventure Bay housed four whaling stations before the industry’s decline in the mid-1840s. The ruins can be seen on a walk to Grassy Point.

MARIA ISLAND NATIONAL PARK
Maria Island can be referred to as a Noah’s Ark for native Tasmanian species. The Maria Island National Park provides an ideal sanctuary, and is one of the best places in Australia to observe endemic birdlife as well as wombats, Cape Barren geese, Forester Kangaroos, Bennett’s Wallabies, and pademelons. Stroll amongst the ruins and restored buildings of the Darlington convict settlement and take a walk to the ruins of the former Probation Station or the striking formations of the Painted Cliffs, where rich iron deposits have stained the sandstone cliffs with coloured streaks of red, purple and orange.

FREYCINET NATIONAL PARK & SCHOUTEN ISLAND
The Freycinet Peninsula is a dramatic headland dominated by a pink-hued granite mountain range called The Hazards. Blessed with picturesque sweeping bays with white sand beaches like famed Wineglass Bay, much of the peninsula is designated as Freycinet National Park. Join a guided hike along the Isthmus Track and be rewarded with
magnificent views from the lookout, or swim and kayak the azure waters of Wineglass Bay. Cruising close to Ile des Phoques and Schouten Island, keep an eye out for large colonies of fur seals sunning themselves on the rocks.

TASMAN NATIONAL PARK & FORTESCUE BAY
The Tasman Peninsula is known for its fascinating geological formations like the Tessellated Pavement, Tasman Arch, and the soaring 300 metre high dolerite sea cliffs of Cape Raoul, Cape Pillar and Cape Hauy - the tallest in the southern hemisphere. Watch fur seals hauling out on the rocks, as well as playful dolphins feeding and magnificent albatross soaring amongst the updrafts created by the sea cliffs. We will visit Fortescue Bay, hike sections of the coastal Tasman Trail and kayak in Canoe Bay.

PORT ARTHUR HISTORIC SITE
One of Australia’s most significant historic places, the UNESCO World Heritage-listed Port Arthur ruins stand sentinel on the Tasman Peninsula south of the narrow isthmus of Eaglehawk Neck. For more than 40 years, the Port Arthur penal colony housed convicts sentenced to hard labour before its heavy iron doors clanked shut for the last time in 1877. Port Arthur has over 30 ruins and restored homes set in 100 acres of landscaped grounds. Join an exclusive ‘behind the scenes tour’ with knowledgeable guides, including access to private collections and historic buildings not otherwise accessible to the public.

WOODBRIDGE & HUON
Where the mouth of the Huon River meets D’Entrecasteaux Channel lies Port Huon, a small community at the heart of a fertile valley with the Hartz Mountains as a backdrop. The sheltered waters of the river allow us to visit the Wooden Boat Centre at Franklin where Tasmania’s maritime heritage is kept alive through the production of hand-crafted timber boats. We may visit Grandvewe Cheeses, an organic sheep farm, with time to learn about the cheese-making process and taste the ‘ewenique’ sheep’s whey vodka at the Cellar Door.

Disembark in Hobart at 8:00am. A post-cruise transfer to the city or airport is included. 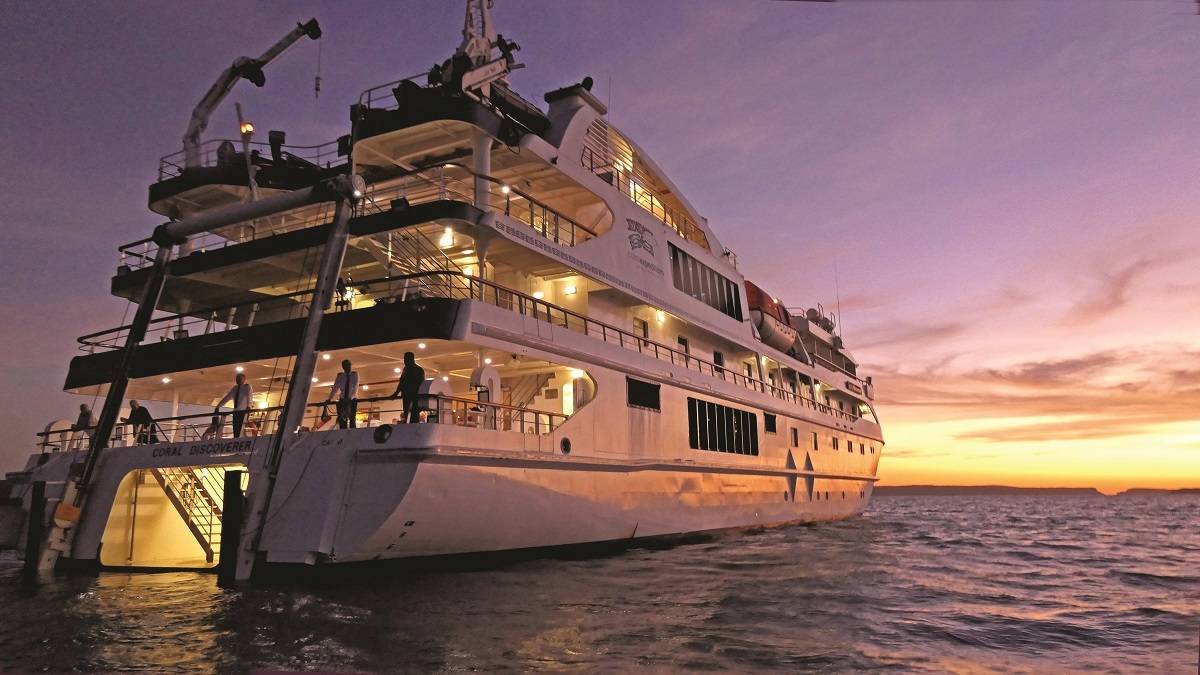 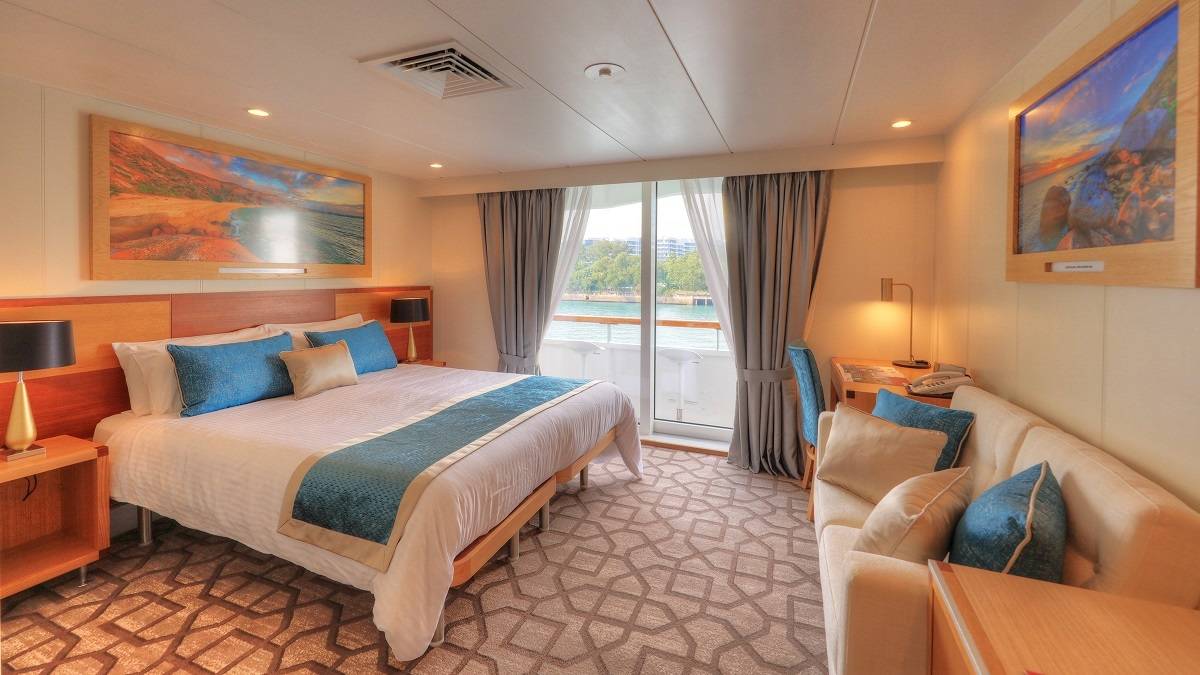 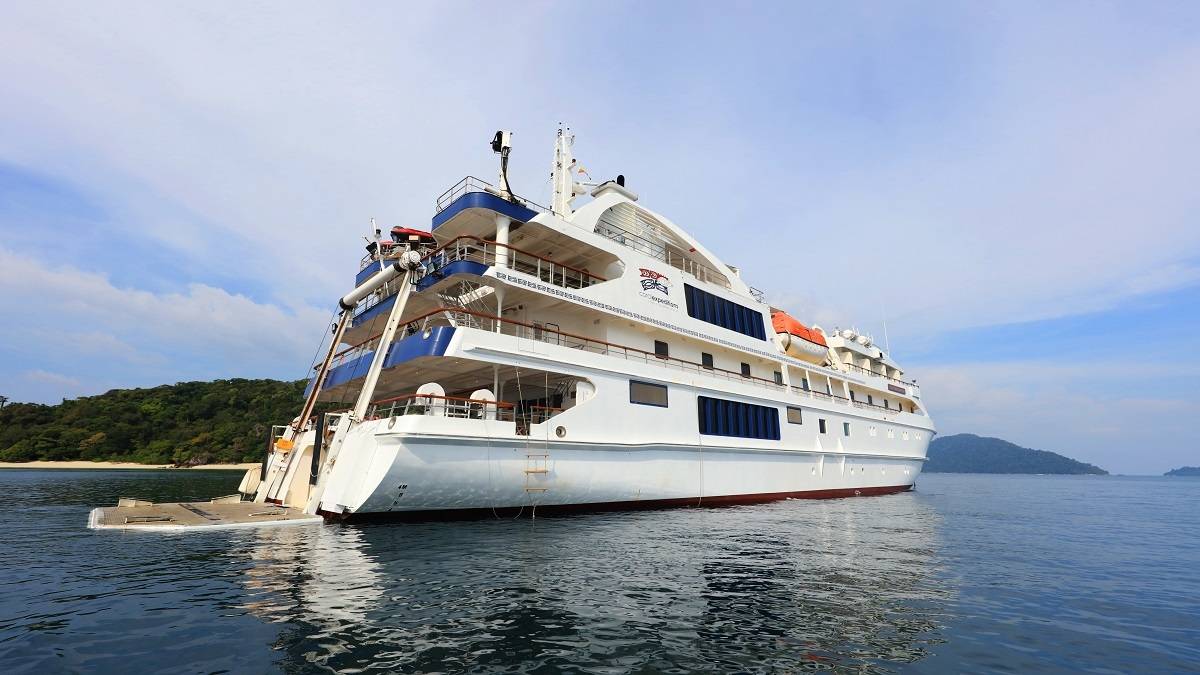 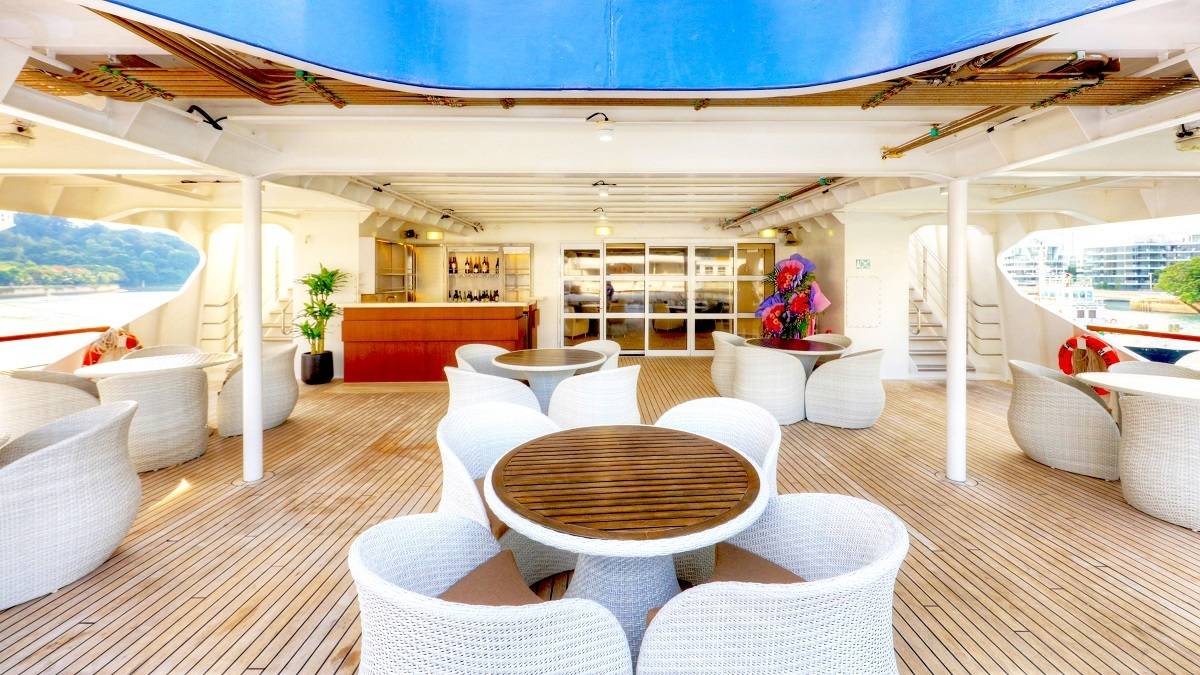 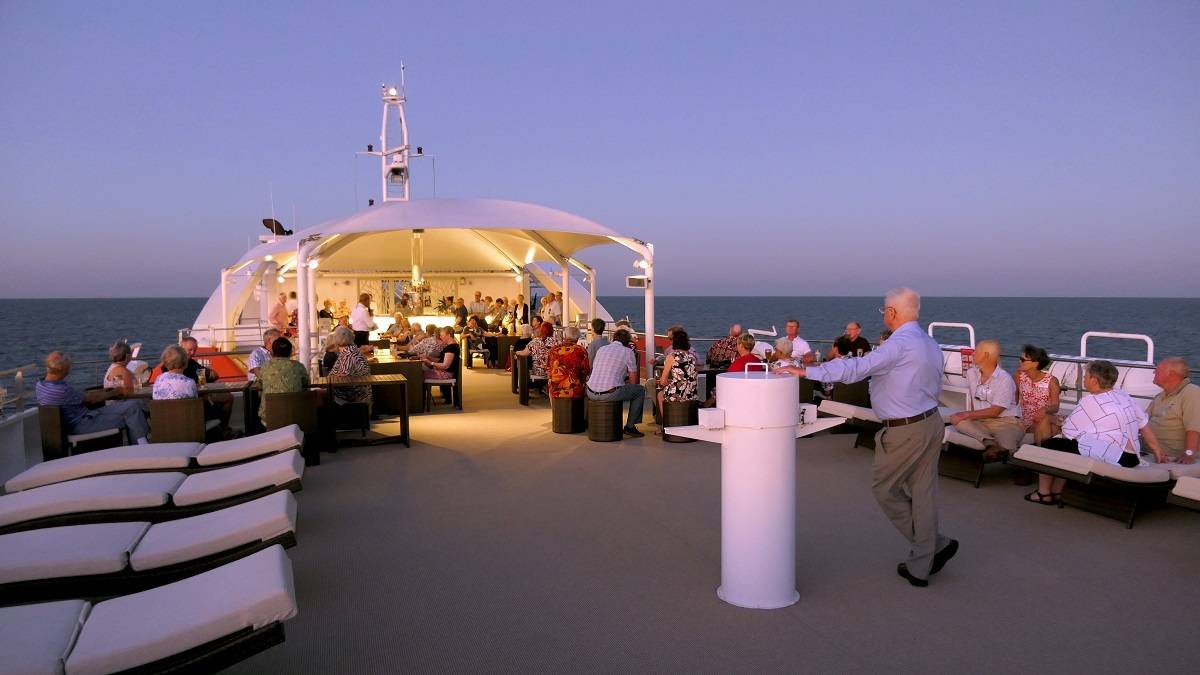 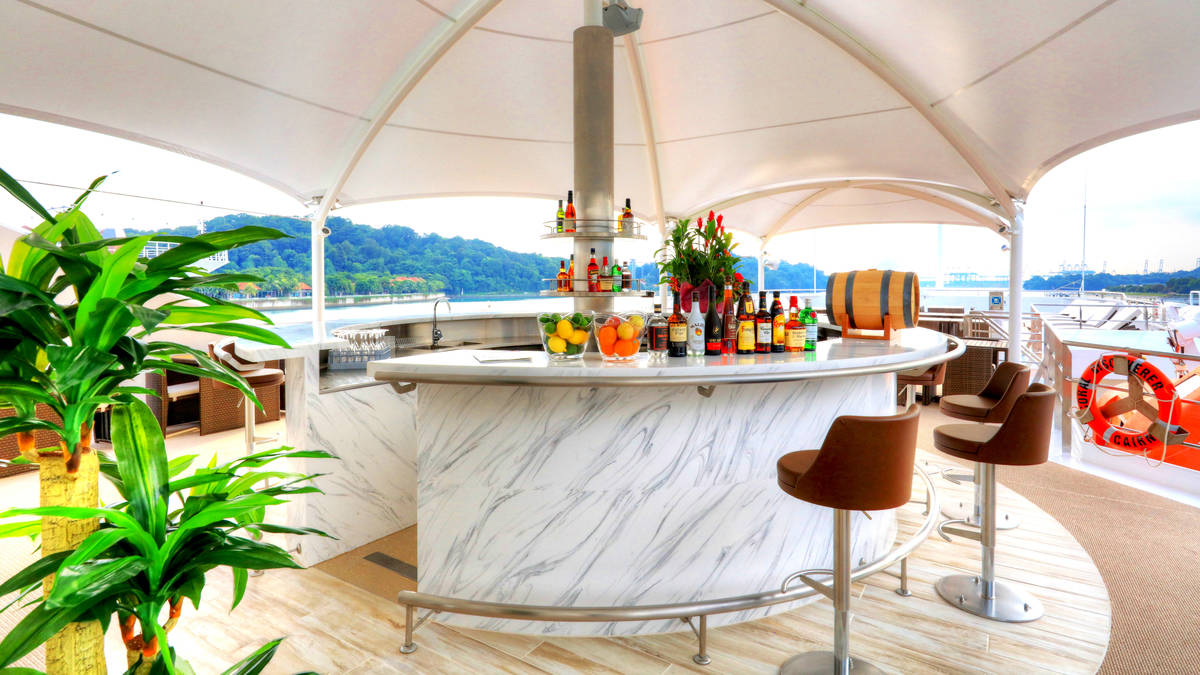 Located on the exclusive Bridge Deck close to the Lounge and Bridge, the six spacious Bridge Deck staterooms are 20sqm in size and open out onto private balconies for expansive ocean views, along with a sofa, desk, telephone and your choice of Junior King or twin bedding.

Encircled by a full-ship promenade, the 19 spacious Promenade Deck (Cat A) staterooms are 18sqm in size and feature picture windows for ocean views, along with a sofa, desk, telephone and your choice of Junior King or twin bedding.

Located in the bow of the ship and encircled by a promenade, the Promenade Deck (Cat B) staterooms are 15sqm in size and feature picture windows for expansive ocean views, along with a desk, telephone and Junior King bedding.

Located close to the Dining Room, the six spacious Main Deck (Category A) staterooms are 18sqm in size and feature large, twin porthole windows for expansive ocean views, along with a desk, sofa, telephone and your choice of Junior King or twin bedding.

Located close to the Dining Room, the three spacious Main Deck (Category B) staterooms are 18sqm in size and feature twin portholes for expansive ocean views, along with a desk, sofa, telephone and your choice of Junior King or twin bedding. 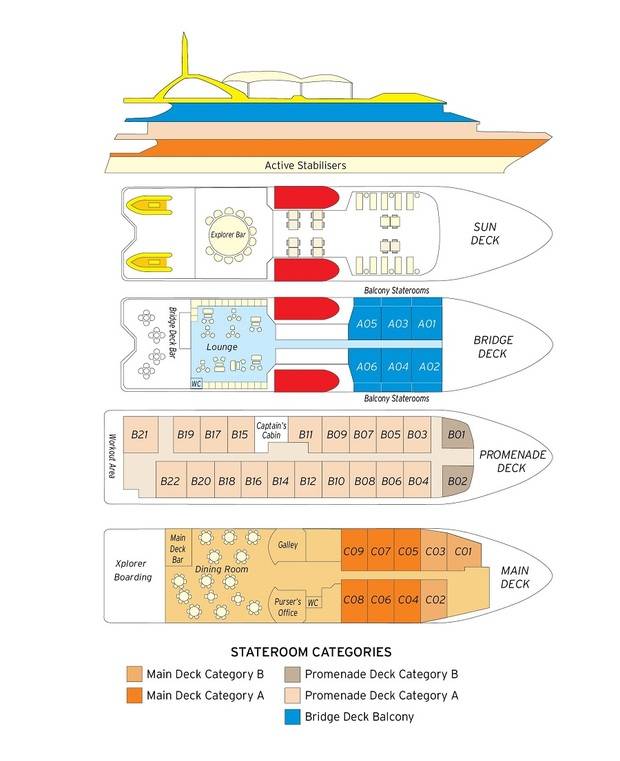 17 January 2021 departure only: This departure will be hosted by Justin Jones, an adventurer, explorer, author and film-maker from the Australian Geographic Society.

This trip involves moderate to challenging walks, therefore reasonable mobility is required to enjoy all it has to offer. Our Xplorer tender permits easy boarding without climbing any stairs. Hikes vary in intensity and where possible we split groups to suit easy and moderate walkers. Guests are welcome to opt out of any excursion and relax onboard – our top deck outdoor lounge is great on a sunny day.  The ship has no elevator. As the itinerary covers remote regions, it is not suitable for passengers with serious medical conditions.